In The News - Interior Design Magazine

September 10, 2016
By Jane Margolies
VIEW SLIDESHOW | VIEW AS ONE PAGE 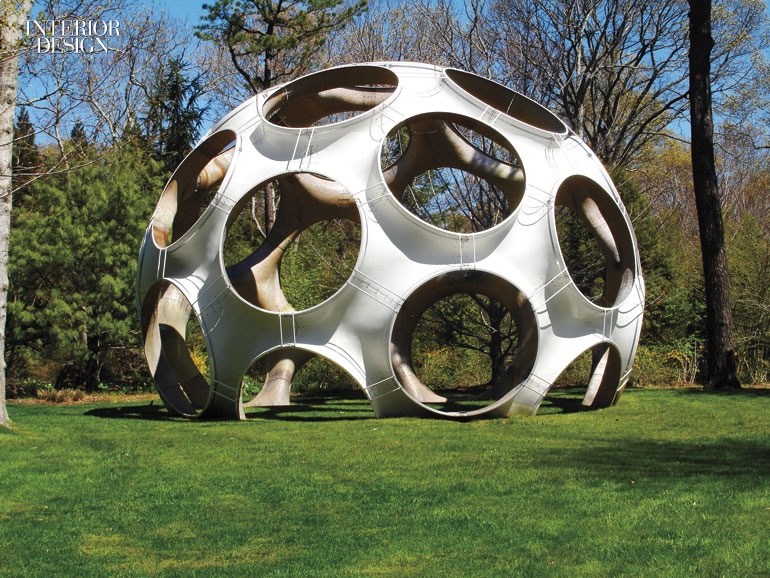 He admits to having doubts about the dogs. Not that the renowned textile designer Jack Lenor Larsen hasn’t welcomed one and all to LongHouse Reserve, his estate in East Hampton, New York. In fact, opening his 16-acre property to the, ahem, public was the point from the start.

Building his home in the late 1980’s, he envisioned it as a Case Study House of the sort in vogue decades earlier, when he was an architecture student at the University of Southern California. His idea was to demonstrate how to live creatively, encouraging Americans to resist the clutch of conformity. Working with Charles Forberg & Associates, he modeled the house on Japan’s Grand Shrine of Ise. He simultaneously shaped the grounds into a world-class sculpture garden.

With the 1991 establishment of LongHouse Reserve, a not-for-profit to oversee the property, the calendar has filled with Open Days and Twilight Tours, exhibitions and meditation sessions. More than 9,000 people visit the grounds each year, including 3,000 students. But dogs? He hasn’t had once since he was a boy back in Seattle. And indeed it’s impossible to imagine a pooch wagging an errant tail in rooms that contain fragile glass by Dale Chihuly and ceramics by Ursula Morley Price, not to mention furnishings by a Who’s Who of modern craft and design. Still, he’s long promoted the performing as well as the visual arts, and it was Laurie Anderson, a past LongHouse gala honoree, who was proposing a “Concert for Dogs.”

The grassy amphitheater, which centers on a towering totem that’s wrapped with multicolored outdoor fabric, was the perfect setting for the gig. So he told Anderson yes. And the August performance was a hit, with the attendees howling in a rousing finale. “I’ve never seen so many handsome dogs,” he marvels—he’s an appreciator of beauty in diverse forms.

“The last of the mid-century modernists,” as he calls himself at 89, is clearly still open to possibilities. A weaver-turned-designer who supplied upholstery and drapery fabrics for almost every major architect of his day—his first large commission was the music room at Frank Lloyd Wright’s Taliesin—Larsen no longer designs textiles. But he writes: His 13th book is in the works. He par­ticipates in the Checkerboard Film Foundation’s forthcoming documentary on his life and career. He curates exhibitions that draw on his extra­ordinary collection of textiles, handcrafts, and furniture from ancient times onward.

Most important, he pours his restless imagination into LongHouse. Textile and product design consultant Sherri Donghia, CEO of SD International, sits on the board and co-curated the 2014 exhibition of garden furniture. And even someone who knows the place as well as she does can attest, “Every time I visit, I see something new.”

Of late, Larsen has been focus­ing on what will happen when he is no longer in residence. Although it’s difficult to imagine LongHouse without him there, he’s powering ahead with plans to open up the 13,000-square-foot house itself, as he has his gardens. “Maintain­ing is no fun. It’s always more interesting to be building,” he says.

With architect Lee Skolnick, a vice president of LongHouse Reserve, Larsen has roughed out a scheme that would turn the two downstairs guest rooms into a proper visitor reception center and galleries for rotating exhibitions. (He has never much liked bedrooms anyway.) The upstairs will be open on a limited basis, allowing people to step into his light-filled rooms and ogle his collections. There is also a concept for a temporary tented structure that could serve as an events space, erected in the spring and taken down before winter.

The renovations and the conversion from residential to institutional use will call for coordination with town authorities and adherence to zoning and building codes. Think fire safety and Americans With Disabilities Act requirements. The board plans to raise the construction funds through a capital campaign.

Lee H. Skolnick Architecture and Design Partnership has just begun the preliminary drawings. “We are going to do everything in a sensitive way, so as not to subvert the essence of the house. Whatever we do will respect the atmosphere, which is contemplative, almost Zen-like,” Skolnick says. “LongHouse has to grow on its own terms.”

But grow it will—or at least evolve. Larsen would have it no other way. He finds himself getting up in the middle of the night to jot down ideas for LongHouse Reserve. “After 25 years, I feel like we’re graduating,” he says. “Now it’s time to get into the really serious mission of preparing for the future.” Whether or not that involves dogs.